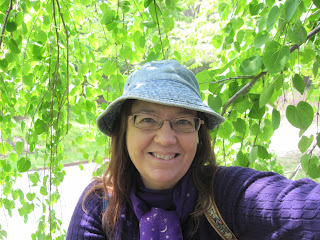 One hazel-eyed, shy bookish girl discovered her voice and met a guitar at age 10 and was never the same. A lifetime of singing married a lifetime of research and writing and produced one very happy, vertically-challenged soprano-historian for the world to enchant…and hopefully, to enchant the world….in whatever corner of that world in which she blooms.


Music claimed me for its own a long time ago...
I began my singing career in cabarets & nightclubs & have maintained a parallel career as a public historian most of my life. My work now combines historical musical performance & lecture, specializing in American music, history, & culture of the 19th & early 20th centuries. I have toured the USA & presented abroad in both public & academic settings.

This is my marvelous, talented, lovely husband, Jim Dalton, musical and life partner extraordinare. I was lucky enough to marry this fab musician and teacher (he's faculty at the Boston Conservatory) three decades ago: Ok. Now, for the writing:
I authored two published books of history (as of 2013) & co-authored a third (original music/essays) with my husband. I am a prizewinning short story writer with a long history of writing feature articles & columns for magazines & newspapers.

I wrote & edited a weekly history column for the Boston Globe (boston.com) (2010-12) (https://asongbird.contently.com for examples)
I contributed articles to the forthcoming Music in American Life: An Encyclopedia of the Songs, Styles, Stars, and Stories that Shaped Our Culture (ABC-CLIO) (on music and theater; period performance practice).

With a master’s degree in American Studies, my current scholarly work focuses on historic civic rituals that incorporate music as a primary element, a subject on which I have presented in academic situations both domestically/abroad. I am a frequent lecturer on the integration of humanities & music, American cultural history,&other topics.

I am founding president of the nonprofit Institute for Music, History and Cultural Traditions (imhct.org). In 2010, I was elected to the council of the New England American Studies Association.