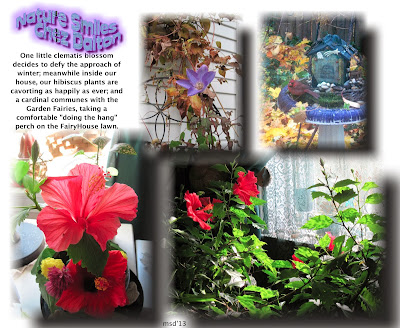 Voting tomorrow, of course. Reading some of the ploys and arguments for or against local candidates, I am sorry to see the kind of appeals that some are making. Ageism, sexism, perceived class vs. perceived class...it's all there. I make a conscious and determined effort to vote with my brain, not with my emotions, prejudices, or from arrogance. I wish I could say the same for others.

Email ThisBlogThis!Share to TwitterShare to FacebookShare to Pinterest
Happy to say will be performing several times in our beloved Connecticut in the holiday season, and seeing the New Year arrive with Hartford friends! More to come, but for now...we are really happy about our lineup for the next few months, well into 2014~!
Posted by Maggi Smith-Dalton at 11/04/2013 03:31:00 PM No comments:

A History of Spiritualism and the Occult in Salem: The Rise of Witch City by Maggi Smith-Dalton
5 of 5 stars


Will Broaddus, Salem News wrote: "In 'A History of Spiritualism and the Occult in Salem,' musician and historian Maggi Smith-Dalton examines the career of this movement in a local context.

Her book …  is in some ways an intellectual history of Salem in the 19th century....a really interesting book...it focuses so much about American and local culture at that point in time... fascinating.

All the information is well marshaled and presented...And who would have guessed spiritualism was an element in Hawthorne and Sophia's relationship…"

Smith-Dalton, a historian and writer, considers the history of spiritualism and the occult in Salem, Massachusetts. She describes occult aspects earlier in the region's history, such as mesmerism, religious sects, and Mormonism, then Salem just before the Civil War through the end of the nineteenth century. She provides the historical and social context for the city, including its link to witchcraft, and tells of key individuals, such as Emanuel Swedenborg, Franz Anton Mesmer, Andrew Jackson Davis, Charles Wentworth Upham, Charles Henry Foster, Allen Putnam, Joseph Gilbert Waters, Nathaniel Hawthorne, and other psychics, healers, and clairvoyants. (Annotation ©2013 Book News Inc. Portland, OR) http://booknews.com/ref_issues/ref_fe...

View all my reviews