NEW POSTING OF NEW ARTICLE! Click this to read, "Tea, Strawberries, and Spirits" 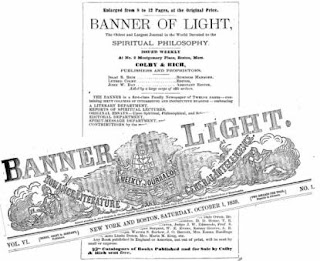 "The religious movement known as "Spiritualism" permeated nineteenth-century life, growing so rapidly that, by 1869, Emma Hardinge [Britten](1823–1899), historian of the first two decades of the religion, estimated that there were eleven million Spiritualists “on the American continent” alone. Estimates made by various publications concluded that perhaps nearly half the population believed in some aspect of Spiritualism, which, briefly, is the belief that the spirits of the dead can communicate with the living.

Boston, a hotspot for Spiritualism, boasted what was one of the most important and widely circulated periodicals. The Banner of Light, founded in 1857, had a national audience. It published weekly lists of Spiritualist lectures and meetings, along with literary works, chitchat, editorials, and listings of mediums and lecturers...."

Go to the site, please, to read the whole article.

A Songbird celebrates "I Have A Dream" Day!

Happy "I Have A Dream" Day!

Let's not forget that MLK's "I have a dream" speech burst forth at the urging of a SINGER, Mahalia Jackson, and I have always considered his speech to be a form of call-and-response to HER singing earlier in the program, which she prompted by reminding him of "the dream."

"Then A. Philip Randolph, the 74-year-old initiator of the march, who had secured an executive order on nondiscrimination in defense-industry employment and contracts by pressuring President Franklin D. Roosevelt with a threat of a march on Washington in 1941, introduced the gospel singer Mahalia Jackson. She sang two spirituals, “I Been ’Buked and I Been Scorned” and “How I Got Over.” King was seated nearby, clapping his hands on his knees and calling out to her as she sang. Roger Mudd, covering the event for CBS News, said after the first song: “Mahalia Jackson. And all the speeches in the world couldn’t have brought the response that just came from the hymns she sang. Miss Mahalia Jackson.” Then, after a speech by Rabbi Joachim Prinz, from the American Jewish Congress, it was King’s turn to speak.

King read from his prepared text for most of his speech, which relied on the Bible, the Constitution and the Declaration of Independence — just as President John F. Kennedy had a few months earlier, when he called for civil rights legislation in a nationally televised address: “We are confronted primarily with a moral issue. It is as old as the Scriptures and is as clear as the American Constitution.”

As King neared the end, he came to a sentence that wasn’t quite right. He had planned to introduce his conclusion with a call to “go back to our communities as members of the international association for the advancement of creative dissatisfaction.” He skipped that, read a few more lines, and then improvised: “Go back to Mississippi; go back to Alabama; go back to South Carolina; go back to Georgia; go back to Louisiana; go back to the slums and ghettos of our Northern cities, knowing that somehow this situation can and will be changed.”

Nearby, off to one side, Mahalia Jackson shouted: “Tell them about the dream, Martin!” King looked out over the crowd. As he later explained in an interview, “all of a sudden this thing came to me that I have used — I’d used many times before, that thing about ‘I have a dream’ — and I just felt that I wanted to use it here.” He said, “I say to you today, my friends, so even though we face the difficulties of today and tomorrow, I still have a dream.” And he was off, delivering some of the most beloved lines in American history, a speech that he never intended to give and that some of the other civil rights leaders believed no one but the marchers would ever remember..."

What a lovely night we had last night. After checking out who's going to be at the new Boston Book Festival at a Cambridge gathering, we walked across the bridge back to Boston... Went over to Fanueil Hall something to eat, walked around the plaza, listened to some music....

Then walked across to the North End.... Down to the harbor, near the Aquarium. Just walked and hung out by the harbor.... looking at the boats and the lights on the water, and airplanes flying up into the night...back through the gardens near the Greenway...all kind of spur of the moment. Romantic, actually, just walking, talking, wandering, holding hands...
Posted by Maggi Smith-Dalton at 8/13/2013 08:33:00 AM No comments: 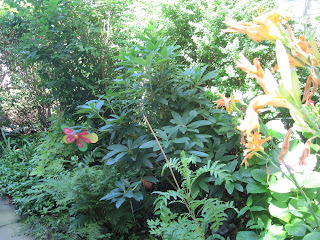 I transplanted lots of plants today in the rain, and applied bloom-boosting fertilizer too. Too much nitrogen in our soil, I think; we have a lot of glorious leafage but not as many prolific bloomers this year. Our garden is alive with singing birds (a visit from a hairy woodpecker today gave me a thrill, we're getting quite a variety these days). I love love love rain. Waiting for Jim to build me my long awaited raised bed for the front of the house, the only spot which gets lots and lots of sun ... can't wait!